Skip to main content
Home » Eye Care Services In Freelton, ON » Ocular Disease Management » All About Cataracts and Their Treatment » Cataracts Causes and Treatments 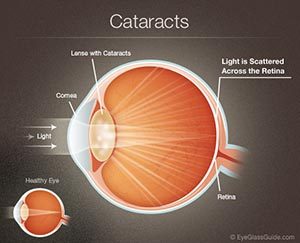 There is no way to avoid cataract formation.  Certainly everyone gets cataracts if they live long enough but not all cataracts require surgery.  Only cataracts that are dense enough to be visually significant should be considered for removal.

As our eye doctor can explain during your next eye exam, there are symptoms that can arise from cataracts but each one is unique.  Most commonly, glare or halos at night, decreased reading vision, increased nearsightedness and overall trouble with fine detailed tasks.

The acronym IOL stands for Intra Ocular Lens.  Without the IOL the glasses that people would have after removing their cataracts would be extremely thick and heavy.  The implant also preserves a more natural state of the ocular anatomy and reduces the risk of long term complications after surgery.

Medical conditions such as diabetes can increase the risk of cataracts.  Certain medications like prednisone can cause cataracts.  Other medications like FLomax for prostate issues can create intra-operative concerns  called floppy iris that makes certain techniques used in surgery more difficult or risky.  Always let your surgeon know of any present or past medications that you have been on for more than a few months.

Treating Cataracts In Freelton & Carlisle ON

Often when people get cataracts in both eyes the surgery is done one eye at a time.  There can be as little as a few days between eyes depending on the surgeon.

Local anesthesia is used and a patient is mostly awake during the procedure.  There is no pain involved.  The procedure is only about 15 minutes.

After surgery there are eye drops to prevent infection for a week and anti-inflammatory drops for 3-4 weeks.  Most people can resume normal activities within 5-7 days.  Many surgeons will recommend no heavy bending, rubbing of the eyes or lifting for the first few days.  Normal activities without restriction should follow.

Often people fear the cataracts can return but this is not so.  Once gone, the cataracts are cured. In some cases there can be a clouding of the capsule around the implant that can mimic symptoms of a cataract.  This can be corrected very easily with a laser treatment to clear up the clouded area in the eye.  This laser is commonly done and is painless and very quick.